I have been told that this octo-pattern looks a lot like the Squiddles in Homestuck, and since I’m a fan that pleases me greatly! I made this pattern as any kind of fun octo-friend, though, so if you have no idea what I’m talking about or what a ‘Squiddle’ is, haha, don’t worry! Stitch yourself one of these little guys anyway!

I worked hard on creating this pattern, and it should only be used for personal….well…okay. If you make me one of these and send it to me so I can be knee-deep in squishy friends, I can probably be talked into not caring if you make them to sell. I made one for myself, but my attention span is pretty low, so even though I want a dozen, it probably won’t happen. *snort* So, if you want to make a pile to sell, I’ll trade ya! Make me one! Muahahahahaha! But don’t copy the pattern and sell it as your own or go corporate with their construction so that I’m left crying about how I could have been the rich one. *sob*

*I use a size K hook for the top dome of the body and the bottom closure, and an H hook for the ridge and the legs. I have only one hook for all of it a few times when I was making one of these away from the house and only had one hook with me, though, and it seems to work out pretty well without a major difference. If you decide to use one hook, you might want to add a couple fewer chains on the legs and an extra round or two on the body.

*I either use Red Heart Super Savor yarn or Caron Simply Soft yarn, ’cause those are my favorite!

*Work in a spiral. Use K hook.

Rnd 10: Working in the back (inside loops) only, hdc around. In a minute you’ll begin working the ridge in the outside loops that you’re ignoring now; that way when you fold the ridge under and attach it to the body, this round will be here for you to stitch it to. Jn with a sl st in first hdc. (30 hdc)

*Ridge begins with Rnd 11, so switch to the H hook.

Rnd 11: Ch 2 so that you can more easily join with a sl st in the front (outside) loop of round 9. To be specific, you will NOT be working in the front loops of round 10, but instead one round up where there is that empty line of loops. I guess that would make this technically not round 11, but round 1 of the ridge, but it just felt right to keep on going with the count this way since I never fastened off. Ch 2, and then work 2 hdc in the same loop as join, hdc in the next front loop, (2hdc, hdc) in each front loop around. Jn with a sl st in first hdc. (45 hdc)

Rnd 15: Repeat Rnd 12. At the end of this round, you’ll kind of fold the ridge under and stitch it to the top of round 10; stuffing it as you go along. 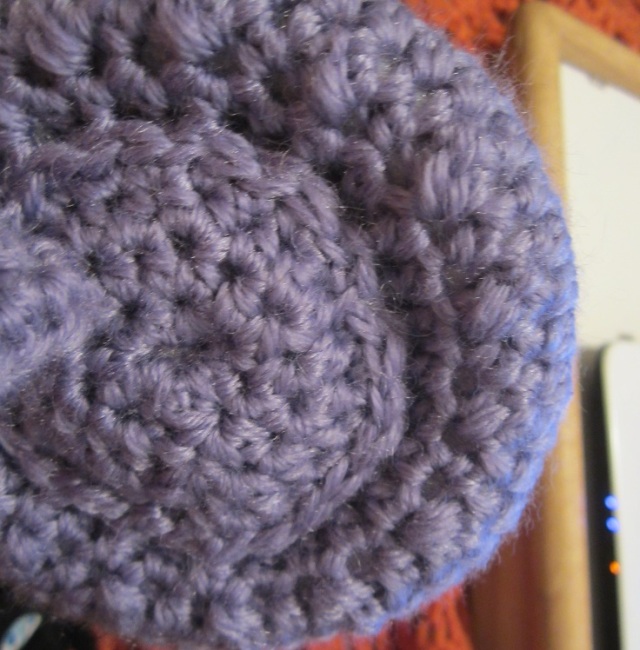 (Make however many you think is appropriate. Yeah, yeah! I know ‘octo’ insinuates that there should be eight legs, haha!  I make six, though, because I think that just looks better.)

*The legs are worked in rows long-ways and then stitched together up the sides, stuffing as you go. Use an H hook.

*Before you make your beginning chain, be sure to leave about a 4-6 inch tail so that you can use that later, after you stuff the tentacle, to stitch the end closed. When you fasten off at the end you should leave the tail long enough to stitch the leg closed up the side and also to sew the tentacle to the bottom of the body.

Rws 3-7: Repeat Row 2. At the end of row 7, fasten off leaving a tail long to sew the tentacle closed along the sides and also to sew the tentacle to the bottom of the body. Use the tail you left at the very beginning to stitch the opposite end closed giving it a rounded appearance.

*Note about the floppy-factor of the legs: I personally thing the legs look really nice sewn onto the body in a round fashion so that the top of the tentacle remains in a circle as you stich along. This puts it stiff against the body and makes them stand up like they’re an exclamation mark. But I also like floppy octo-tentacles. If you want more floppy tentacles, then before you stitch the legs to the body, first pinch the top in half and sew the top closed so that you only sew in a single line when attatching it to the body rather than in a circle. Then the tentacles will be more wriggly.

Working in a spiral without joining:

Sew the eye to the body, and then use white to stitch some glossy lines for a more innocent, wide-eyed appearance!
Mouth:

I prefer the look without a mouth at all, or to use felt to cut out a mouth to sew on, however, if you are a crochet-mouth fan, then here is a shaply-smiley pattern for one.

And now you’re done! Well, other than looking at this picture with my cat in the background. Isn’t Mizzy Kitty so pretty?? Yep. 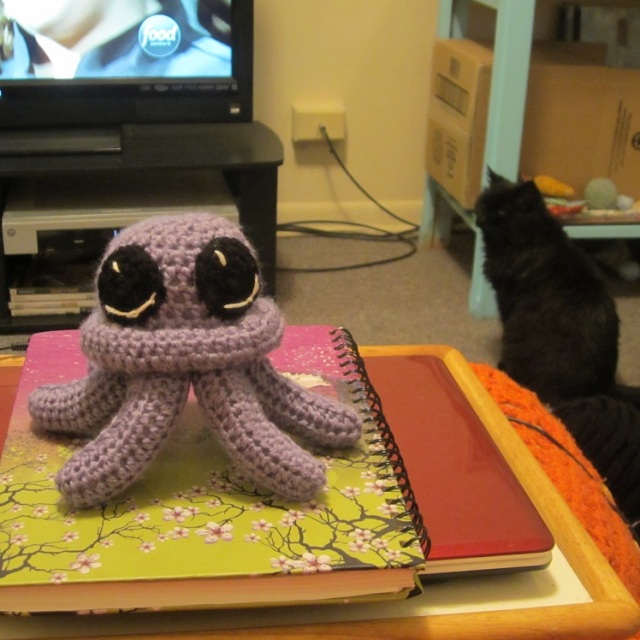